skip to main | skip to sidebar

A New Year, an Old Home & a Giant Yard

We have taken possession of our little green house again.  After 3 years of renters it is time to move home.  My dad's cancer isn't progressing, he's holding his own, and my mother says she has things under control. There is no reason to rent out my house anymore!  So back we are in our small house on a giant lot.

Because of the enormity of this lot I am taking the entire month of January off from jewelry making in order to get my yard tamed.  My son Jack-Stewart - all of 8 - announced last year that he wanted to grow up to be a farmer (as well as a scientist and a builder) - but right now he is fixed on 'farming' - even if it means living in a city, with all its limitations.  He wants a cow and a horse.  So instead we settled on having chickens - which are fine to have within the Portland city limits.  I think he has forgotten about his desire for pygmy goats "just like the ones our neighbor has."

So, if you feel inclined to follow our journey to start an urban farm (gardening and growing things is actually my hobby when I'm not making jewelry - but I grew flowers - not food),  it should definitely be interesting...  Jack and I are up for the challenge!  #1 on our list:  the blackberry and the english ivy - ahhhhh.

My final show for 2011 - Splendorcraft: Buy local and handmade

Okay, I know I said that the Abernethy show I did in November was going to be my only show of the Holiday Season, but I couldn't turn down the invite on this one... this looks to be a great show.  I hope you can make it down, as I'm even going to have a few pieces in my newest color story:  Migration.  I currently have a fascination with grey and purple and love putting these shades with other neutral and sometimes not so neutral (dark fuschia) colors.  It's the best part of what I do - bringing unusual colors together to tell a story.   I also want to thank everyone that helped to make TQB Designs successful for 2011 & Happy Holidays!  - Pink

This is my one and only show for the Holiday season.  Here is your chance to see the breadth of my collection, all my new designs, colors and shapes.  Of course, after this you can always purchase my work at the retailers in Portland that carry my work year round (see my website:  tqbdesigns.com).  But, they don't always carry all the styles and colors.

As many of you know I love to support the Portland Public Schools and because this is just a one-day show, I was able to fit it into my schedule and hopefully do some good to bring arts to our kids:)  Please come out, if you can, and support this wonderful cause and buy some local art.  You'll feel better, I'll feel better, and our kids will benefit.  Thanks! 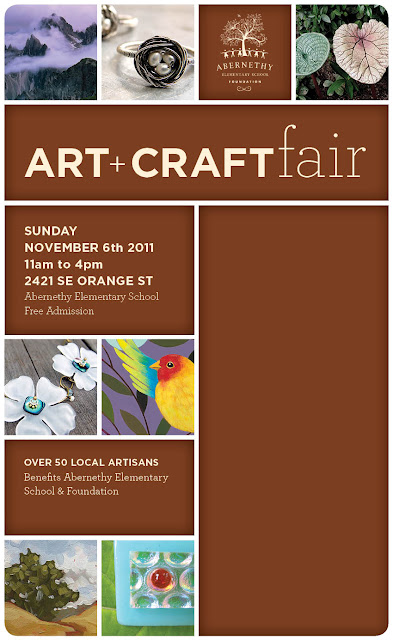 One and Only Show: Sheboygan, Wisconsin

I am again lucky this year to have been selected to participate in this fantastic group show at the Kohler Arts Center in Sheboygan, Wisconsin.  Christine End is the curator this year and it looks to be a fantastic show. If you are in the Sheboygan area please do stop in to see the work.  We artists worked so hard to make some spectacular thing (I know I did) and we love to share.

This year the colors combinations I submitted are "Hadrian's Wall" steeped in neutral greys, black and one spot of color with a luscious purple, complimented by "Arbol de la Vida" also in neutral shades of brown, purple/grey, rosy shades.  Also submitted work in "Atomic" in blues, greens and browns - a very contemporary "mid-centry" combination of shades.  Along with the new colors there are some great new styles - using my sterling bar as in my Waxing-Waning earrings, Branched necklace, Comet, and Spinner pendants, in the combinations of "Hadrian's Wall".  I'm also very excited about my newest earring style:  Ovaled Dot Hoop (you can see one in mulberry in my Etsy store).  It has been a long time coming to make an earring that isn't cluttered or massive due to over decoration, but in its own right - just with one of my beaded beads.  These are a statement-maker:)

It was a great year of experimentation, shape and color discovery for me and I feel that the work I have submitted this year at the One and Only is very reflective of this new-found inspiration. 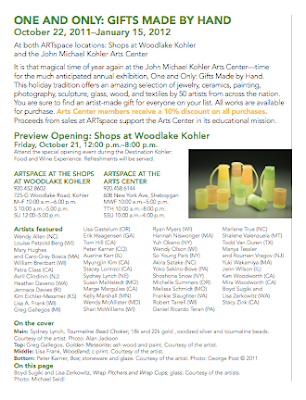 Posted by TQB Designs at 9:04 AM No comments: 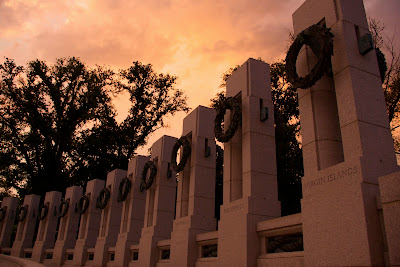 I am home again, making work for my retailers for the holiday season and filling my Esty store with new things for those that can't get to one of my retailers in Oregon, Wisconsin, or Minnesota.  I'm having a wonderful time creating in my studio.  This may sound a little on the bland and boring side for some, but after my crazy and eventful summer, believe me, I'm in no mood for drama... 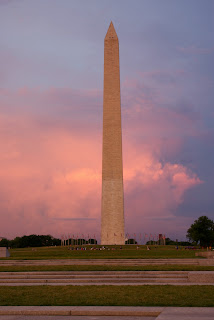 While on the road I realized mid-season that I was starting to run out of parts and had to find a place where I could solder, etc...  This presented quite a challenge.  But, not for my husband, Jason.  He not only found me a place to solder (a hotel room with a private balcony) but it was in a beautiful location.  I had always wanted to go to Mackinac Island (all the way at the top of Michigan).  It is a quaint island where cars are not allowed.  It has one of the most beautiful hotels ever located there:  The Grande Hotel.  We stayed on the mainland across from the island and took the ferry over the next day - between my working time and shows. The smell of horse poop was a bit overwhelming and there were bicycles everywhere.  We rented a couple and rode around the entire island. It was unreal to be in a place that had no cars and didn't smell like exhaust.  I highly recommend a visit:) 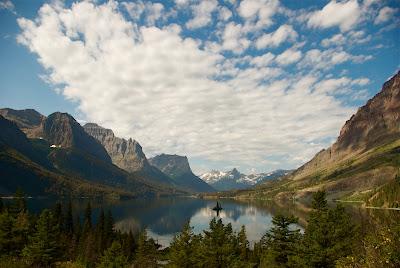 Anyhow,  It was such a nice break after the long, arduous, and hot days of the Ann Arbor Street Fair.  I was located next to a person selling digeradoos (is that spelled right?) - you know - those Australian instruments that make sounds like a dying cow?  Okay - it was fine in the beginning... but after day 2 (of a 4 day festival) I was ready to put that digeradoo... well... you know....

Anyway, the festivals after Michigan were all much cooler and the weather was great.  I had especially good show in Minneapolis - the weather was fine at 78 degrees for the 3 day festival and we got to go to our favorite pub in St. Paul:  The Blue Door...ymmm deep fried green beans! Then I was on to Jackson, Wyoming.  What a fabulous place!  I had forgotten how beautiful that was there.  Wow!  And the show was absolutely top-knotch with some spectacular artists and professional. 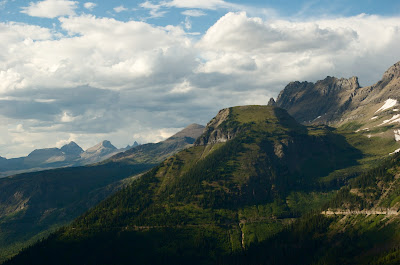 On our way home we spent a little time in Yellowstone.  I couldn't go all the way to Jackson and not spend some time in Yellowstone.  Then we decided that we had a little time to spare and drove up and stayed at Glacier National Park as well.  I had never been inside this part.  The last time I was there I took the road around it to get to Browning (wanted to see the Museum of the Plains Indians - and if you're ever in the area - it is WELL worth the visit).  So, we took the "Going-To-The-Sun-Road" through Glacier, with it's spectacular vistas and massive mountains, and big horned sheep, seeing what little there was left of the glaciers (almost gone - scientists say they will all be gone within the next 15 years).    As you read this posting you will see some of the photos I took over the course of the summer from Washington D.C. (when I did the show in Philly) - to Flathead Lake and Glacier National Park in Montana. 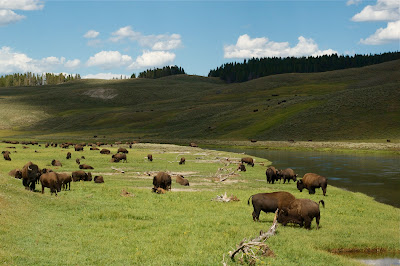 I had amazing Mexican food in Downtown Detroit  (go-figure),  I got to pet the dog of a secret service agent outside the White House, and got stuck in a 1 hour buffalo traffic jam in Yellowstone Park.  What can be better than that?

Thank you so much to everyone that visited me at my shows.  I got to see some of my repeat customers (like in Sheboygan - LOVE Sheboygan, WI) and some of my Etsy customers -that was a thrill (Catherine:)!  I never expected to see those people from my virtual world in the real one:)  It was also great to see new cities and old familiar ones (I hadn't been back to Philly in 10 years - the place of my birth).  I hope to do something like this again next year - perhaps you have a great festival that I should know about in a city near you!  I'd love to see it:) 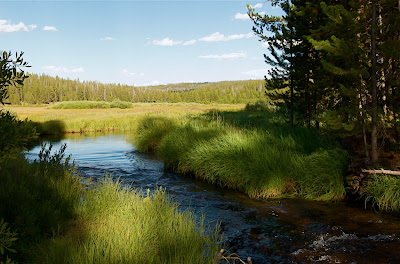 I'm heading out soon for Colorado and to Glenwood Springs for the Strawberry Days Festival.  This is their 114th festival - Wow!  114!  Anyway, this town looks amazing and I can't wait to try out the hot springs... especially after those long days standing on your feet during the festival.  If you are in the neighborhood, please stop by my booth and say hello.  I have loads of new designs and colors.

Evidently the festival has extended the hours - good for you and for me:) ! Here's the skinny: 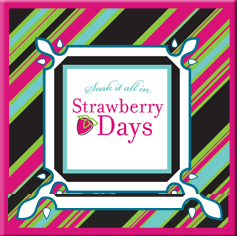 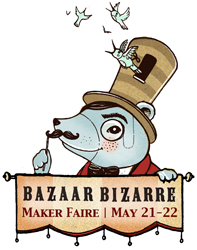 With a solid night sleep conquered in the last week, I have to say the lack of was well worth the trip to the San Francisco Bay area for the Bazaar Bizarre at the Maker Faire.  Make Magazine knows how to put on a party - that's for sure - and this was was amazing!  There was enormous sculptures made from stone - some with large pieces of steel that turned, big steam trains, people on giant velocipedes, loads of steam punk and  computer geeks, and I say that with love...

I had a great time at the Bazaar Bizarre and of course, as always at shows, had some wonderful neighbors! I met some amazing people and was even interviewed by Fredric Paul of All Business, for his blog :  you can read that here .  All, in all, I highly recommend any show put on by Bazarre Bizarre and definitely will apply for this next year.  What a great time....

This is just the first of 8 shows I will be doing between now and September - my full schedule is posted on my website:  tqbdesigns.com - so look to see if I'm coming to a city near you:  TQB Designs North American Tour!
...now it's on to Glenwood Springs, Colorado and the 114th Annual Strawberry Festival, June 17, 18, & 19.

TQB Designs
I love how visual communication can convey so many stories. I'm never without my camera, my Moleskin and of course beads - beautiful beads!

Places to Find My Work: